Way back in August, when we started the CGM, I planned to update soon and often about our experience with it.  I think I have waited this long because I was freaked out by what I first saw.  Maybe I was even embarrassed a little...afraid to show you my short comings as a pancreas.

A couple of months ago, Wendy at Candy Hearts posted her "sharks teeth" and I realized that its ok not to have a perfect graph.  I am now able to focus on the information that I am gathering from the CGM and not obsess about the numbers.


Sure, we get a graph that looks like this once in a while! 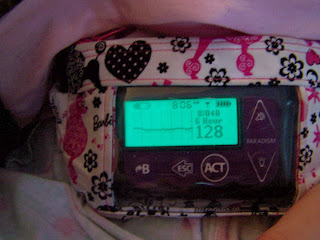 But don't let me fool you, that is not what it looks like most of the time.  It resembles something more like a rollercoaster ride.
Let me tell you what I've learned about using a Continuous Glucose Monitor thus far.  The needle for inserting the sensor is big.  Ally just looks at it and gets really anxious.  We have to use numbing cream.  The sensors are FDA approved for three days, but we use them for 6.  I find that they can be accurate for about this long.  I never try any longer than that because I don't want to risk irritating the insertion site.  As it is, we have very little real estate to use since have both a pump infusion site and now CGM site.

At first it was frustrating that the numbers on the CGM did not "match" the numbers on her blood sugar meter.  I KNOW that there is a lag time since the CGM is measuring glucose in the interstitial fluid instead of in the blood.  But for some reason it still frustrated me!  The thing is that I started really LOVING the CGM when I learned that it's not the numbers that are important.  It's all about the trends!  I look for periods of time when her blood sugar is rising, or falling, on a consistent basis.  This allows me to make the appropriate changes in her basal rates and insulin-carb ratios.

The sensor data has helped me to realize that Ally MUST PRE-BOLUS for meals.  You can totally see the BG spiking on the CGM screen when you don't do this.  Pre-bolusing doesn't give you perfect numbers, but it has definitely dulled the spike in most cases.  Prior to using the sensor, Ally would test in range before a meal and then at the three hour mark afterwards she would be in range.  We assumed that she was remaining in range for that whole time.  Boy were we surprised to see the spikes in between!

The CGM alarms can be annoying.  But it is totally worth it to me to be annoyed once in a while if it is going to prevent Ally from having severe hypoglycemic episodes.  And that it does!  We have a significantly lower number of low blood sugars each week.  This is not because "we've got it all figured out and she is in good control."  It is because the CGM alerts us to let us know that a low is predicted.  Her BG is on its way down.  We are able to "troubleshoot", you know with a little Juicy Juice or glucose tablet, heading off the impending low.

I also love that it is sort of a checks n balance system while she is at school.  When the nurse calls me and says, "We have a birthday treat today.  It's a cupcake,"  we use the sensor data to help us make a decision about bolusing for that cupcake.

My most favorite feature of the CGM are the arrows.  Oh, the arrows!!  When I would check Ally's BG before we had a CGM, I would see that it was in range and think we are good.  But then I would wonder, is she going up or going down?  Especially before exercise, when she is about to get on the bus for a 45 minute ride or even at bedtime.  The arrows help me to decide if she may be dropping and need something to ward off the low or possibly her blood sugar is on the rise.

I have to say that I am not a fan of the insertion device.  It has a "jabbing" effect in which, I think, it puts it in hard.  But with that being said, (using the numbing cream) Ally usually doesn't flinch.  Although this insertion happens only after we have had about 10 minutes of anxiety leading up to it just because she can "see" the large needle.  And it doesn't work to tell her to look away!  BUT...read on.  Better things are coming!

I once read an article on A Sweet Life about Medtronics newest insulin pump, the Minimed Revel.  We upgraded Ally' MM Paradigm pump to the Revel last fall when she started using the CGM.  This article has a really good description of what is new on the Revel as compared to the Paradigm.  I also enjoyed reading the answer to the question proposed "What’s next in the pipeline from Minimed in terms of pumps and CGMs in the US?"  Specifically related to CGMs this is what they said,


"As for CGM, our next sensors will have greater accuracy and a more comfortable insertion process."

This weekend, I attended the Children With Diabetes Focus on Technology conference with Hallie from The Princess and The Pump and another D Mama friend, Kelly, and her family.﻿  They also spoke about Medtronic's CGMs in the pipeline.  Some of the features that I heard about this new sensor that is currently in FDA review:

Yay!!  That all sounds wonderful!  Technology just keeps getting better and better.  I can't wait to see this new sensor.
And just for fun...Check out Texting My Pancreas, when Kim shared a hilarious comic strip that she made to describe The Seven Evolutionary Phases of Her CGM Ownership.