This momma is stressed out!  Standardized testing can be stressful for kids, but don't forget about the moms!  Especially, moms of children with type 1 diabetes. 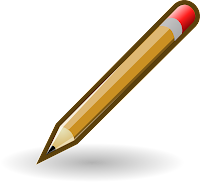 Ally has standardized testing for 2 hours and 15 minutes each morning this week.  We do all the things to prepare for a testing week that the other students in her class do.  We have a good dinner the night before, get a good nights rest, start off with a good breakfast, sharpen new pencils.  But all that is not enough for someone with type 1 diabetes.

You will note that I emphasized morning above.  Many think testing in the morning is a good thing.  But for us  morning is a difficult time for managing blood sugars because we are dealing with the dawn phenomenon. (Our body secretes hormones in the pre-dawn hours which cause our bodies to be more insulin resistant. Your pancreas would naturally release a little more insulin if it were a properly functioning pancreas. We have to adjust Ally's basal rate to deliver a little more insulin during these hours.) It has taken some hard work (and often continues to be a challenge) to manage Ally's morning blood sugars while avoiding a drastic spike in blood sugar after eating breakfast.

Another thing we have to consider when going into a testing week is how Ally's high and low blood sugars will effect her ability to perform on the tests.  Cognitive ability is most definitely impaired when your blood sugar is out of range.  These are just two small excerpts that I found to support this:

From The Effects of Diabetes on the Brain by Barb Nefer, eHow Contributor


Short-Term Effects of Hyperglycemia (High Blood Sugar): A University of Virginia study showed that hyperglycemia in diabetics can slow down their brain function and reduce their cognition. Their verbal ability is impaired, as is the ability to perform simple tasks. The issue resolves itself when the proper blood sugar level is restored.

Altered Mental States:  When blood sugar is low, there isn't enough fuel to allow the brain to function properly. Appearing drunk, staring into space, lethargy and refusing to talk are all signs of acute hypoglycemia that may mimic signs of stroke, epilepsy or a brain aneurysm.

Psychiatric Problems:   Agitation, combativeness and confusion are relatively common in acute hypoglycemia. According to the Department of Psychiatry at the Nassau University medical center, seven percent of patients who are seen in the E.R. for psychiatric problems actually have acute hypoglycemia as the root cause of their ailments.

So, you can see why it would be so important for someone with type 1 diabetes to not only get a good night's sleep and eat a good breakfast, but also to maintain blood sugars in range during testing.  Easier said than done.

Ally is able to make-up the sections of the test that she misses if her BG (Blood Glucose) is out of testing range, however, once she starts a section of the test she may not leave the room or make it up if she is unable to finish it.  The plan was to check her BG before testing begins and in between sections of the test.  That way if she was out of range, she would not even start that section and would be able to make it up at another time.  Her CGM (Continuous Glucose Monitor) has also been very cooperative and is very close to actual BG.  So, we are relying on the CGM once the actual test has begun.  If she is feeling low, she will check her CGM and, based on a little cheat sheet that we made together, will pop a glucose tab or two if she is trending down.  (Please note, we do not usually make a practice of treating blood sugar based on CGM readings alone.  We typically test with blood glucose meter first.  However, since this standardized testing time cannot be stopped, we have to work within those guidelines.)  And, of course, if CGM says less than 80, she must STOP testing and check with blood glucose meter - and forfeit the remainder of that test section.  It is what it is.

Testing Day 1:  Her AWESOME teacher sent me emails in between each section of the test letting me know what her BG was and what, if anything, they did to maintain that.  First BG check before testing, 183.  I'll take that!  She had some IOB from breakfast, so no correction and they told her to sip on her water. :)  At the first break, she was 143, let her eat a quick snack while class stretched and took restroom break, then on to the third section of the test.  She came into lunch at a perfect 120, just after finishing up all the testing.  Day 1= Success!

Testing Day 2:  She went to bed at 130 the night before.  That is always a bonus, because if she wakes up at a good number then her breakfast spike is manageable.  But as the night went on, I would wake and glance over at the MySentry only to find her trending up.  Darn it.  I checked her BG, gave a correction dose of insulin and dozed off for a couple more hours.  Only to wake to the same or higher number in 200s.  Grr.  I checked, corrected, set temp basal and went back to sleep.  By the next time I woke up to see the number still trending up, I decided to do a site change.  I knew that having her BG start off at a good place was critical for testing day.  New reservoir of insulin, new site, correction dose, temp basal increase...now back to sleep for 2 hours until my alarm goes off, confident that her number will be in range by then.  WRONG!  :(  She woke up in mid 200s.  Not a good way to start off a day of testing.  Sure enough, I get a call just before the first testing section begins...she's 350 and being sent to clinic to hang out while rest of class begins testing.  I'm so frustrated!!  I finally decided to open a new bottle of insulin (even though the opened bottle was only 18 days old) and go over to school to change out her reservoir again.  It took so long for her to come down into range that she missed the whole morning of testing.  Poor girl sat in the school clinic for over 2 hours doing busy work.

Same dinner. Same breakfast. New site. Bad insulin?? Stress??  Has the ear infection from last week not cleared up yet?  All these things are running through my brain at a speed of about 500 mph.  How can one day run so smoothly and the next feel like such a failure?  I give up D...you win today!

Here's hoping I'm up for the battle tomorrow and the next 2 testing days.  (Oh yeah, and now the make-up test day too!) 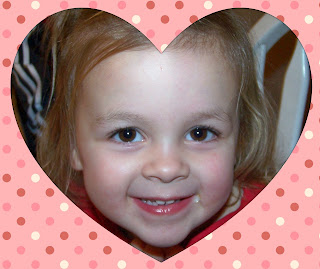 But that's not all that's turning four.

This week  Diabetes turned Four in our house too!
For the first time, I did not focus my thoughts on Ally's diagnosis day.  Instead, I spent the day thinking about how proud I am for how far we've come!  We all let Ally know that we are proud of her and that she inspires us every day.  And of course, we ate ice cream!


As I remember with anticipation about the characteristics of 4 year olds, I reflect on what our 4 year old diabetes looks like.

Four year olds feel good about things that they know how to do.  They are beginning to gain self-confidence.

We have much more confidence in ourselves and in our diabetes decision making four years later.

We are beginning to let Ally and her 4 year old D take new adventures without us.

Four year olds still need to be watched closely as they are capable of some interesting things when you turn your head!

We've come a long way in four years, but I'm still not willing to turn my head on D...and probably won't for quite some time! 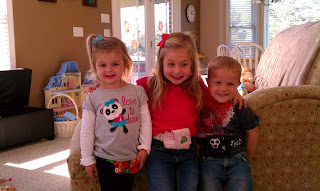 Everyone gets excited about trying out a new blood glucose meter...even our non-D kiddos! 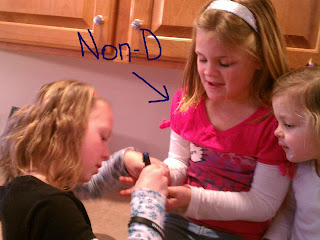 We have all made lifelong friends. 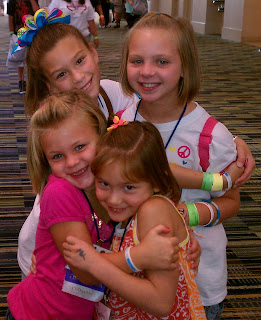 We accessorize with bags of all kinds!

The characters in our picture books even check each other's blood sugar!  (At least that is Lexi's interpretation of what this dragonfly is doing to the dog's ear :) 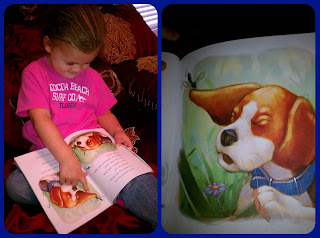 And Four Year Old Diabetes meant that Ally rode on the
Girl Scout float in the Christmas parade (without me). 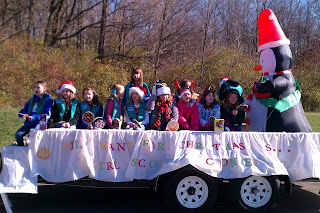 4 Year Old Diabetes has become a blended member of our family.