Flooding the Heavens with Prayer 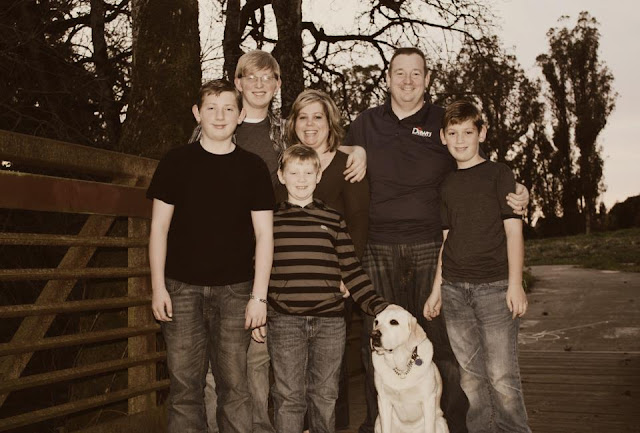 Do you know this beautiful family?  This is the Schuhmacher family.  We have never met in person.  They live across the country from me.  They have all boys; I have all girls.  They have a dog that is a very important member of their family; We have miniature aquatic frogs.  Our lives seem to be completely different.  Completely opposite.  But they are not!

Three of these beautiful boys in this photo have Type 1 Diabetes, like Ally.  Meri was one of the very first D Mamas to reach out to me after Ally's diagnosis.  She has been encouraging, supportive and inspirational to me over the last couple of years.  She is so much more to me than a Facebook friend.

My heart is aching over the news that Meri's husband, Ryan, has been diagnosed with cancer.  I hope that I can be as encouraging and supportive to her as she has been to me.  The family has set aside this Sunday, March 4, 2012, as a time of prayer and fasting.  Won't you please join me in Flooding the Heavens with Prayer for Ryan Schuhmacher, this Sunday, and every day, for as long as it is needed.

Please visit this FB page dedicated to Schuhmacher Family's Miracle and join us in praying for a Miracle!

Read Our Diabetic Life: Cancer. to hear this prayer request directly from Meri.

I believe in Miracles!

Now, let's storm the heavens and ask for a miracle for Ryan Schuhmacher.

Ally was just 5 years old.  She was in kindergarten.  She was in ICU at Children's Hospital with a diagnosis of Type 1 Diabetes.  She was in DKA (Diabetic Ketoacidosis).

You know how they say time flies?  Usually, we say that time flies when you are having fun.  Nothing about having diabetes is fun!  I just can't believe it has been 3 years.  It seems impossible that Ally has been living with diabetes for almost 1/3 of her life.  In so many ways, I still feel new to this life.

Maybe it does seem like three years when I think about how different our lives are now and how long its been since I've slept through the night.

I guess it has been 3 years when you realize that...I can spout off the carb count for anything from half an apple, without its skin to 4.5 oz of a blizzard from Dairy Queen...I can do a site change in a matter of a minute (something that once took me a good 20 minutes!)...Heck, I can even do a site change in the dark!...I can tell her how many carbs to enter and know approximately what the bolus should be even before her pump's "Bolus Wizard" calculates it for us...I don't get squeemish at the site of blood anymore...I can let her out of my sight for a short time, trusting that she knows what to do if she feels low...I can check a blood sugar in my sleep (and very rarely get the wrong kid!)...I can explain how the pancreas and insulin should work in a person's body...I wake up at 2:58 am, before my 3:00 am alarm goes off.

And finally, we know its been 3 years when our family and friends don't understand our language.  For example, "put in 40, dual wave, 50/50 for 1:30".  (For those of you living parallel lives to ours...no explanation necessary, I know!)  But our family and friends look at us like we are speaking alien.  By the way, that jibberish means that Ally should enter 40 carbs into her pump, setting it for a dual wave, where 50% of the insulin will be administered right away and the other 50% will be delivered a little bit at a time over the next hour and a half.

Even Ally said this morning, "I can't believe I've had diabetes for 3 years!"  Then she got a really shocked look on her face and said, "MOM!  Justin Beiber wasn't even popular back then!"  Oy!

The picture of Ally that has been on the header of this blog was taken in kindergarten.  Just a couple of months before her diagnosis, over 3 years ago.  I have often looked at that picture and thought that I needed to update it, as she has grown so much!  I just have not been able to make myself change it.  I love this picture!  It was instantly one of my favorites - love that toothless smile!  And now, years later, it still is a favorite.  Now I can see the innocence, the freedom, the carefreeness of my little girl in that picture.
When I look at that picture, I know that she had not yet felt the scary feeling of a low blood sugar, or the anxious feeling of a high blood sugar.  I know that she was not attached to a medical device that was keeping her alive.  I know that her fingers were not sore and laden with black spots from all the finger pricks.  I know that she had not yet been scared that she would die.

So, I am going to sit here for a few minutes and just stare at that picture.

And now, I will update my blog header with a new picture that speaks to me too.  I now see a courageous, strong and responsible girl.  A girl that makes me so very proud!

What I Wouldn't Say Out Loud

There are a lot of things that go through a person's mind.  Thank goodness we don't actually say all of them out loud!

When it comes to Ally's diabetes, there are things that go through my mind that I would never verbalize.  I keep them inside because...it would scare Ally...or anyone else that was listening.  Heck, these are the kinds of thoughts that scare me!  I'm sure that you know these thoughts that scare me.

Lately, I've been having different kinds of thoughts that I wouldn't say out loud.  But this time, they are different.  Sure, the bottom line of these thoughts is that I am worried about something happening to Ally.  Only the most recent ones are more related to me not being there to take care of her.

I have been having an odd tenderness on an area of one of my tatas.  I'm not letting myself get worked up about it.  I believe it is from my 2 year old.  Not sure how it happens, but I feel like I get knocked there by her a lot.  I'm planning to get it checked out.  But in the meantime, one of those thoughts did creep into my head.  What if...??

What I can't say out loud is...What if something happened to me?  What would happen to Ally?  Who would take care of her???