When I'm dress shopping for my girls, I do have to consider each one individually.  Jessi has certain requirements, something of the Fancy Nancy nature.  The frillier the better!

Ally likes something cute and hip.  Being the oldest, she also tends to get more new clothes than the other girls. It only stands to reason, because she doesn't have any older sisters passing clothes down to her. Recently, we went shopping for a nice Christmas dress.


When buying a Christmas dress for your little girl, what do you look for? Frills or ruffles? Bows or lace? Special colors or patterns?

Those things are all important, but there is something else that we have to consider when buying a special outfit. 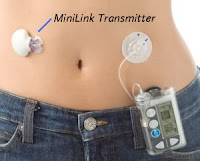 I know, if you are reading this, you already know that she has type 1 diabetes and most likely also know that she wears an insulin pump.  But that is an important factor that we have to consider when making our holiday dress selection.


Ally's insulin pump is connected to her with a site, which we rotate every 3 days between her arms and hips or bum area.  The pump is usually worn in a pump pouch around her waist.  When Ally needs to give herself insulin, or check her CGM reading, she needs to look at her pump.  Easy enough.

Now picture this seemingly simple task, while wearing a dress.  She would have to pull up her dress in order to do this.  Not so easy!

It is not so pleasant, in the middle of class or church, to have to pull up your dress because your pump is alarming.  Nor is it fun, in the middle of a party or a restaurant, because you want to bolus for your food.  This is when the remote feature would really come in handy.  But her MiniMed Revel pump does not have a remote.

So we adjust.  She still looks really cute (and don't forget hip) in her sweet little bubble skirt, sweater and leggins with bows :) 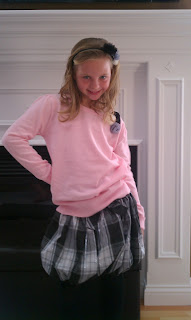 Oh wait!  Did you think that I was counting down until Christmas?  Wow!  I guess that is only 7 days away.  But that's not what I was referring to.

It has been 7 days since Ally started feeling ill.  Last Sunday afternoon (day #1) she started complaining of a stomach ache.  She wouldn't eat anything and spent the rest of the day laying on the couch, holding her stomach.  Anytime she has a stomach ache, I check for ketones (because stomach pain and nausea are both signs of ketoacidosis).  None.  No fever.  Blood sugars were holding steady in the 120-140 range.  And the cycle began.

The cycle where I tried to figure out what was going on in her body.  Is she getting sick?  Is the stomach ache from diabetes?  Maybe it was just something that she ate earlier that didn't agree with her?

Monday morning (day #2) we woke up to a nice blood sugar of 121...and ketones!  The moderate kind (.8 on blood ketone meter).  We keep Ketostix (urine strips) for routine ketone checks because they are cheaper than blood ketone strips.  However, if I ever suspect that she is sick, I skip the urine strips and go right for the blood ketone meter.  Children With Diabetes highly recommends blood ketone testing over urine testing.  Read more about it here.  I originally learned of blood ketone testing, not from our endo, but from one of my favorite fellow bloggers, Reyna of Beta Buddies.

So, .8!  I thought that she must be coming down with a tummy bug. We worked hard to get rid of those ketones all day. We gave her insulin to correct for the ketones and she was doing a great job of drinking lots of fluids to help flush them out. The ketone level dropped, according to our blood ketone meter, to .6.  But she still didn't feel like eating. She was afraid she would throw up.  So I didn't force it.   Then a few hours later, ketones were up to 1.5!  I realized that since she hadn't had any food all day, she was not getting any insulin (other than her basal and a little for ketone correction).  After speaking with the on-call endo, I started giving her carbohydrate filled drinks to sip on so that I could get a little more insulin in her to help fight those ketones.  I was checking her blood sugar and ketone levels every 2-3 hours through the night, correcting with insulin when needed.

(Sidenote: Since we were originally trained to read ketones with Ketostix (urine strips), I can never remember what the number readings from the blood ketone meter mean. Small? Moderate? or Large? Luckily, I remembered that Hallie of The Princess and The Pump has a sick days tab on her blog. I quickly hopped over there and found this helpful chart for reading blood ketone meter results. Thanks Hallie!)

This up and down ketone battle continued through days #3 and #4.  She started having low blood sugars, so I set a temporary basal rate in her pump for the night.  That worked to bring her blood sugars to a comfortable overnight number, but then the ketones would come back.

So, let's recap the vicious cycle going on inside my head (and inside her poor little body!).

But wait!!!  This cycle did end.  On Thursday morning (day #5), Ally felt good.  Tummy felt better.  No ketones.  BGs running on the lower end, but not many lower than 70.  She ate a small breakfast and headed off to school.  The school nurse and I checked in with each other all day.  I was worried about her having lows at school, following this tummy thing.  Instead, she was high all day.

And a new cycle began.  High blood sugars and a fever!!  I was seriously beginning to think that this was never going to end.  Poor kiddo missed school again on Friday (day #6 and also her 4th day absent this week).  She cried each day that she missed because she wanted to go to school so badly.  She was afraid that she would miss out on the "secret" school project (ie: gift for parents) that her class had been planning. 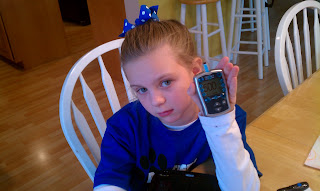 So, day #7 and we were still fighting fevers and high blood sugars.  Yes, that says 500!

Day #8, I'm holding my breath and hoping that I can now stop counting the days of this lousy illness and begin counting down to Christmas!!