Recently, I have heard more than one person talk about how diabetes affects the siblings of a child with T1. Ally is our T1 and our oldest. Her sister, Jessi, is just 4 years old. I don't even think she remembers life before Ally's D. And I KNOW that Lexi, who is 8 months old, does not remember life before Ally's D, because she was born shortly after D entered our lives. I really had not given much thought to the idea that D affected them too. But today it crossed my mind.

Sure, when Ally was first diagnosed, Jessi went through a period of time where she seemed to be acting out for attention. At 3 years old she didn't understand why Ally was all of a sudden the center of attention...ALL.THE.TIME! She didn't understand why all of a sudden she had to wait to get her food until we had finished checking Ally's blood sugar, weighing food, counting carbs, calculating boluses, giving Ally her shot - Wait, I forgot...one of us holding Ally down while the other one of us gave her the shot:( (This is for another story...but I am reminded of how much we now love the pump when I think back about all this stuff!)

But back to Jessi. She did go through some adjustments, just as we all did. But now D is just part of her life. I heard her tell a friend the other day, "My sister has diabetes." The friend said, "oh." And they went on and played. That is how I think Jessi looks at it now - "oh." It's just part of our life.

Today though, I was reminded that D has affected Jessi too. I went grocery shopping this morning, with Jessi and Lexi in tow. I don't typically let the girls talk me into buying special things for them while we are shopping. However, they have learned that by the end of a big grocery list I am tired and I might answer yes to anything as long as they just keep up with the cart! Today was one of those days. Apparently, Jessi asked me if she could buy some Swedish Fish. And apparently, I said yes. They ended up on the conveyor belt at checkout. I asked her where those came from and she answered, "It's ok, they're just mine." Well, I caved, partly because I was too tired to continue the conversation, and partly because it crossed my mind that I never just spontaneously buy them candy anymore. Not Anymore. 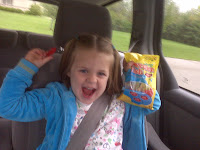 So all the way home in the car I was thinking about how Jessi too has been affected by D. Sure, in this case, she is better off for it. Less spontaneous candy buying. Less sugary treats around the house (at least not just for fun, only to be used to treat a low BG!). But it was symbolic really. Just as those Swedish Fish sneakily ended up in my grocery cart...D so sneakily interferes with Jessi's life too. She still hears people asking about how Ally is doing. She still has to ask which plate is hers so that she does not take the one with the carefully measured out food - for Ally. She still cannot have a juice box whenever she wants - because we may need it to treat a low blood sugar later! She still feels left out when Ally gets a snack/juice box and she doesn't. She still gets awakened in the night when we check Ally's BG (they share a room). Most of all, she sees her sister who she loves so much have to fight with D every single day! Jessi never complains about things being unfair. Instead, I hear her say, "I wish Ally wouldn't have diabetes anymore." Me too.

**I just finished posting this and then I went upstairs to check Ally's BG before heading to bed. I found Jessi in bed with Ally, the two of them snuggled up together in a twin bed! 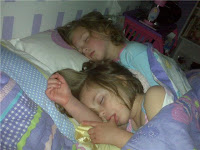 Some things are worth waiting for....

Some things really are worth waiting for!

Friday evening we went to a JDRF Skating Party. (The skating rink donated half of the admission cost to JDRF.) It was nice for Ally to see other children with T1 and a really great family outing as well. I have not been roller skating since I was about 12 years old. Ally, Jessi and I all put skates on and hit the floor...almost literally!!! Keith and Lexi watched from the sidelines:) Grandma & Grandpa, Aunt Mindy (my sister) and cousins - Brett, Brody and Kaylen also came out to support Ally and JDRF. It was a great time!

But now to the part that was worth waiting for....

First, We met fellow D-Mom, Hallie, with her husband Jason and adorable Avery! Hallie and I live about 5 miles away from each other and "met" over the phone about 9 months ago, but had not yet met in person. Although we did not get lots of time to chat at the skating rink (I couldn't keep my girls off the skating floor!), it was so nice meeting them in person and I look forward to spending more time with them. Hallie is just as sweet as I thought she would be and she really "has it all together"!

The second part that was worth waiting for...

At the skating party, representatives from a couple of pump companies were available to answer questions. I thought I'd check out the pamphlets and chat with the Medtronics rep; Ally has a MiniMed Paradigm insulin pump. Every time that I walked up to her table she was in a conversation with another person. I really did not have anything pressing that I needed to talk to her about so I went back to skating with my girls. Then I kept feeling myself drawn back over to that table. The rep had been talking with a couple for a very long time and again I thought that I did not really need to waste her time as I already have a pump and this couple obviously was trying to make a decision about getting a pump for their child. So again, went back to skating. After waiting for most of the evening, and it was almost time for the skating party to come to an end, I thought I'd give it one more try. Boy was it worth the wait! I wanted to ask her more about the CGM (Continuous Glucose Monitor) and also about different infusion set options for Ally's pump. (For those of you not familiar, and taken from Medtronics site...An infusion set is the thin, plastic tubing which delivers insulin from the pump to your body. At the end of the tubing is a soft, flexible cannula, which is a small tube. You insert the cannula under your skin. This spot is called your infusion site, and it remains in place for up to three days.) We currently use the Silhouette infusion set. As we were talking about it she mentioned a Sil-Serter. At first I thought that she was talking about the insertion device for the Quick-Set infusion set which inserts with the click of a button. I mentioned again that we use the Silhouette and that we manually put the needle in to insert it. She said, "You don't have a Sil-Serter?" The blank look on my face must have told her everything she needed to know because the next thing I know she is running out to her car! She came back with a Sil-Serter...an insertion device for the Silhouette infusion set.

Want to see a site change in action with the Sil-Serter? Click here, then go to the Silhouette demonstration on the right side of page.

OMG! How did I not know this existed? With a simple cocking and clicking, snap the site is in! Anything to make site changes less stressful for me and for Ally. After 8+ months, Ally still gets really anxious for every site change. I am also trying to train my sister and my mom to do site changes, but Ally is dragging her feet! She has been really nervous about it. Now she is very excited about the Sil-Serter and even said that she thinks with that she could even put her site in herself! (We'll see about that!) Hopefully this was worth waiting for!
4 comments: