I AM in Third Grade Now, Mom!

Ally's 3rd grade teacher has been amazing so far!  Honestly, I've never felt the love like I do from her.  Ally was diagnosed with Type 1 Diabetes in February of her kindergarten year.  Her kindergarten teacher was very concerned and willing to do whatever was needed.  Ally also had extremely compassionate 1st and 2nd grade teachers.  There is just something extra special about Mrs. R.  Or maybe another way to say it is that she has come along at just the right time for Ally!
Ally is Mrs. R's first student with Type 1 Diabetes.  She has a distant relative with T1 and she had gestational diabetes during her pregnancy, but she admits to not knowing much about caring for someone with diabetes.  I have met with her a few times.  Each time that we have met, she has been very focused, prepared with questions about Ally and questions about diabetes.  It is obvious that she has researched Type 1 Diabetes by the questions that she asks.  She told me that she has read through Ally's school packet several times.  She wants to understand the whole picture, much more than "When should I send her to the clinic?" 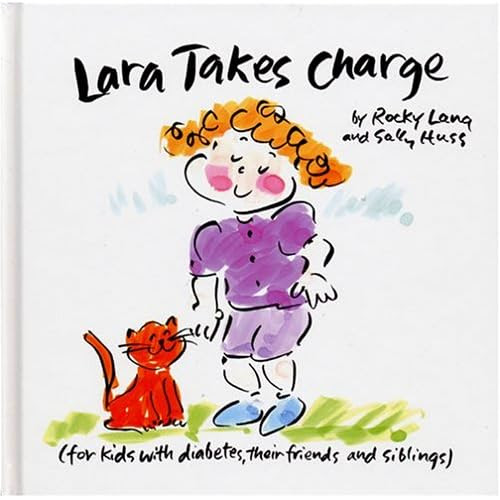 The latest conversation with Mrs. R was about our choices for educating Ally's classmates and their families about Type 1 Diabetes.  Mrs. R wanted Ally to decide how and when the information would be delivered to her classmates, as well as who she would like to do it.  In both 1st and 2nd grades, I went into the classroom and read the book Lara Takes Charge by Rocky Lang and Sally Huss.  It is a cute story about a little girl with type 1 diabetes.  I like it because it is colorful, doesn't deliver more information than young children can understand (or need to know!) and the little girl in the story wears an insulin pump.
This year, Ally told me that she didn't want me to read that book to the class.  I realize that she is in 3rd grade now, and maybe having your mom read a book to the class is less appealing than it has been in the past!  She also says that the book is kind of "babyish."
I found this article, Back-to-School Tips for Parents Managing a Child with Diabetes on dlife.com. I especially liked the section titled "Get and Keep The Child Involved." It has this advice...


Depending on the age and how long the child has had the disease, a child with diabetes is generally happier and healthier the more s/he is involved with the diabetes care. It is key to engage the child in the school plan and letting him or her help choose when and how fellow students learn about diabetes. Keep the lines of communication open about managing diabetes at school and while the child can help in the care, diabetes is not a do-it-yourself disease, so the adults at school need to remain involved.

Ok, I got the message.  So, I asked Ally how she would like to share information about diabetes with her classmates.  She quickly reminded me of an amazing video that we had watched together.  It was shared by a fellow D Mama and facebook friend, Kim.  Her 6 year old daughter, Avery, tells all about having Type 1 Diabetes.  It is really awesome!  Ally thought that she might like to make a similar video.  I loved this idea!  But then when she came home from school the next day, she plopped down on the computer, opened up PowerPoint (I didn't even know I had it on my laptop!) and began writing her own story.  I was so happy that she had felt empowered to do this on her own.  I think that she will be so comfortable sharing this story, with real pictures of her pump and other diabetes supplies.  She and her teacher are working out the details about sharing it with the calss.  We printed and laminated her story, but since she used PowerPoint, they may choose to share it on the Smart Board instead!

And if you have not seen this video by the amazing Avery, you will definitely want to check it out!  So inspiring!!

Proud of My Girl for Speaking Up

I am so proud of my sweet Ally.  I will tell you why, but first, let me remind you that this is the same girl who has a hard time speaking up to her teachers when she feels low.
Ally had soccer practice the other night.  The coach brought treats to celebrate their hard work in the weekend's game.  She had ice cream sandwiches and popsicles.  As she passed them out she told the girls to choose one or the other.  Ally looked over at me for approval, I nodded giving her the go ahead.  Then I said, "Ally, check the box."  (She knew that meant to check the carb count so that I could give her insulin to cover the carbs when we would reconnect her insulin pump at the end of practice just a few minutes later.)
The coach heard me ask Ally to check the box and she said, "It's ok.  The popsicles are sugar free."  I'm sure that she thought (as many do) that sugar free means that Ally can have them free of needing insulin.  (Not the case...sugar free popsicle = 4 carbs.)

In some instances, possibly including this one following an hour of soccer practice, we would not cover those 4 carbs with insulin.  Sometimes we do.  However, my point was that they still have carbs and for us, carbs = insulin.
But none of that actually mattered because Ally picked the ice cream sandwich!  (Don't blame her.  I couldn't have helped myself either!)

She looked at the box and yelled "20 carbs, Mom!"  Coach said, "You can't have that.  Have a sugar free popsicle instead."  Ally did not skip a beat saying, "Well, those still have carbs and I can eat whatever I want as long as I have insulin for it!"
Now, I really like her soccer coach.  And while I do appreciate that she was thinking about Ally when she made these purchases, I was disappointed that, once again, my words had gone in one ear and out the other!
But most importantly, I was so proud of Ally for speaking up!

As this school year was approaching, I revisited my post from last year, Back to School with my Smarties!.

I thought that I was going to read it and see how far we've come since then. I thought that the back to school preparation for Ally would be a piece of cake this year. After all, it is our 3rd school year that we have started with D.

Instead, I realized that "Back to School" will always mean something different for us than simply buying new school clothes and school supplies. Sure, the preparation that we did last year and the year before have paid off. I know the school routines.  I have some great organizational tools and educational materials for sharing with the school staff.  But some things will just have to be part of the back to school routine every year. I had to prepare for a new bus driver, a new classroom teacher, a new PE teacher, a new art teacher and a new music teacher! (By new, I mean new to us and new to D.)  Geesh! You'd think that at least one of these could have remained the same from 2nd to 3rd grade!! Oh well, that just makes 4 more bodies in the school that will be educated about type 1 diabetes.

Something else was different too. For as much work as had to be done educating school staff this year, I kept feeling like I had someone looking out for us through this process.

Ally likes to refer to her Great-Grandpa, who passed away in 2008 a few months before her dx, as her "Diabetes Angel." He had type 2 diabetes, but she remembered seeing him check his blood sugar and when she was diagnosed she said that she wished he were here because he would understand what she has to do every day. 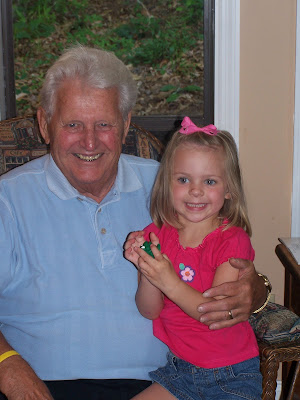 As I began the sometimes grueling process of teaching Ally's new teachers, coaches and caregivers all about D, I found several things that eased my mind.

~  We would have the same school nurse as last year!
~  The new bus driver actually has a son with type 1 diabetes.
~  Ally's religious education teacher is a RN.
~  Her cheerleading and soccer coaches were both familiar with type 1, as they had each had a T1
child on their team the previous year.

I love the idea that Ally has a very special "Diabetes Angel" looking out for her and I'd love to think that he did just that as we started this school year! 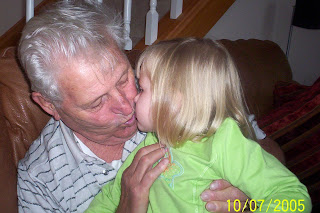 The older girls have been back at school for 2 weeks now.  We are slowly getting back into the groove and the regular routine.  Well, that is all of us except for Lexi!  She misses her big sisters so much!  I really wish that I could have a dollar for everytime she asks where the girls are.  I think that trip to Friends For Life that we've been saving for would be paid for!

I have to say that I am enjoying the one-on-one time with Lexi.  She was born just 6 months after Ally's type 1 diagnosis and I think that much of her early life was spent waiting her turn for things.  (Contrary to the typical order of prioritization with a newborn!)
Lexi and I are enjoying morning walks, playing outside, reading books, even folding laundry together (er..unfolding as she likes to do!).  Yesterday, we were outside playing.  As I started pulling some weeds, I noticed that Lexi became very interested in the mulch. I watched her pick something up and study it.  I figured that it was a bug –yeah she does that! 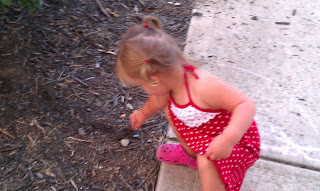 She brought it to me saying “SHOOGA! Mommy, Ally’s SHOOGA!” 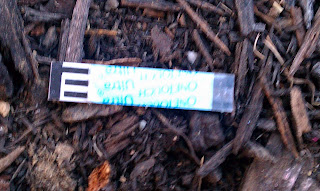 It was a test strip.  She calls them "Ally's Sugar".
Man those things are everywhere! It’s funny when we visited another D-family’s house recently, I saw one on the floor and forgetting where I was quickly grabbed it up thinking it must have fallen off of one of us! You know, out of our shoes, stuck to the bottom of my bag, from the back of my hair...EVERYWHERE I tell you! 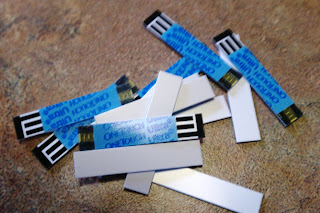