What's in your Doctor Kit?

Do your children have a doctor kit?  Or maybe you remember having one as a child.  It was one of my favorite toys as a kid.  The one my girls have is a much fancier version than the one that I remember having.  This one even includes a "pager"! 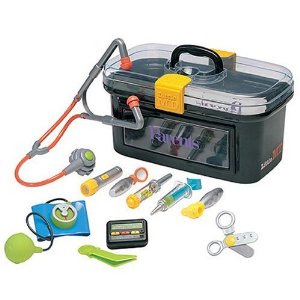 That is not the only thing in my girls' doctor kit that is different from my childhood version.  Ours also includes an old blood sugar meter, a couple of test strip containers, an expired test strip or two (and hopefully, they haven't found any of the thousand used ones we find lying around and thrown those in there too!), and a lancing device.  Don't worry, no lancets, just the "clicker"!  It seems, however, that we have forgotten something in "our family's version" of a doctor kit.  Watch this video and you'll see Lexi discover what we forgot.

﻿
Ahh...she needs her juice!  When I walked into the playroom, I found Lexi "checking her baby's blood sugar".  She looked up at me for 2 seconds, said "She's high," and went right back to it.  She was not happy until she heard the "shunk" of the clicker.  (Did you notice that she forgot to check what the meter said??)

I laughed out loud when she threw the meter and went running for juice!  I guess this doctor kit needs some fast acting carbs added to it!  (And, possibly, we need to teach her that LOW means juice :)

The Day Will Come, Will We Be Prepared

I was just reading an article on http://www.diabeteshealth.com/ titled Celebrating Caregivers.
It took me back to the week of Ally's diagnosis.  I remember sitting in the hospital room, hanging on every word that the dietician was saying.  I was so scared that I would not be able to take care of Ally once we left the hospital.  Obviously she taught us a lot those couple of days.  But the one story that I can still "hear" her telling us was about a young girl, who she had recently met with, that was getting ready to go away to college.  She said that this girl had been in tears, afraid, overwhelmed.  You see, this young lady had an amazing D Mama.  This Mama had managed her diabetes care for years since her daughter's Type 1 diagnosis.  And this young girl, ready to take on the college world, had no idea how to count carbs or to figure her insulin boluses.

Ok, so by college, it is hard to believe that she would not have picked up on some of these skills (Yes!  Those who count carbs and bolus insulin are skilled! :)  I remember making a note that day, amidst all of the how-to's of D care, that we should include Ally in her diabetes management - as much as possible, at the appropriate ages, but before its too late!  Ally was in kindergarten then, so even though I "noted" it, I may not have really internalized it.  Over the years, I have.  I get it.  I know the importance of teaching Ally to be responsible for her own diabetes care one day.  But I still just don't want to imagine it.

I think it is a constant struggle (isn't everything about diabetes?) - How much of her diabetes management should I expect Ally to do at 8 years old?  Will I be able to pull back when it is time to let Ally take the reigns?

This excerpt from the article is still ringing in my ears.


"I resented it, frankly. Why was my mom, the person who was supposed to take care of me, giving me ownership of this daunting disease? The answer, of course, was that the best way she could help me in the long term was by giving me control of my treatment. It stung a little, and I certainly wasn't perfect. But my mom knew I needed a chance to not be perfect, to grapple with diabetes on my own terms."


"If I've succeeded so far, it's largely because of the example she set for me in those first 10 years. And where I've fallen short, it's because I've forgotten about or ignored that example."

It is so hard for me to imagine not holding Ally's hand through it all...but this article has reminded me of the importance of her taking on the responsibility of her own D care, eventually.  And also, that in the meantime I am responsible for setting a good example :)

When I started this blog, my goals were three-fold.  1) To connect with other people living with and/or parenting a child with Type 1 Diabetes,  2) To educate others about Type 1 Diabetes, and  3) To just plain vent about it!  It has been my therapy.

Today, as I am writing this post, I'm feeling like I have become a bit bragadocious on the blog lately.  Please know that my blogging goals have not changed.  But, this feels like the best place for me to show how very proud I am of Ally.

Last week, I told you about Ally not wanting me to read the "childish" book about diabetes to her class, as I have in years past.  I also told you about Ally's inspiration from Avery's awesome video and her decision to model her own Powerpoint presentation after this.  We were just waiting for Ally and her teacher to decide when to share it with the class.  She had asked me if I could come in and just sit in the back of the room, in case any of the kids had questions that she couldn't answer.

Keith & I had the chance to get away for a couple of days last weekend.  (Many thanks to my awesome Mom for taking care of the girls!)  While we were out of town, I received this email from Ally's teacher.

I meant to email you today, but got busy and it slipped my mind, so I'm doing it now from home.  Ally did her presentation today and did a beautiful job.  She seemed very comfortable sharing her book and Powerpoint and answering questions.  As you know, I've been talking with her about when she'd like to do it and if she wanted to do it on her own or with you, a friend, Mrs. P (nurse), etc.  Each time before, she hasn't been sure or quite ready, but today when I talked with her about the possible options of setting it up for next week and having you come in or doing it herself, she was just ready.  I think she's become more comfortable with communicating with me about needing to go to the clinic and sharing info from Mrs. P and has had a few different friends escort her to the clinic or help her with assignments, so maybe she was just ready to bring everyone in the loop.  She did want Mrs. P to join us, which she did.  The truth is, she didn't really need me or Mrs. P except for a little moral support.  She was very organized and mature-She even smiled a lot.  I was really impressed and pleased with how comfortable she was.  Her classmates were very concerned and interested and were attentive the whole time.  The Powerpoint was great.  You both did a very nice job with that.  I have a lot of respect for Ally.  She is amazing.  I'm glad she's in my class this year.


I hope you had a good trip. Have a nice weekend! ~Mrs. R


Tears. I was so proud of her! Ally tends to be shy when talking about her diabetes. Actually, until she feels 100% comfortable, she is shy in any situation. I was shocked (in a good way) that she had decided to go ahead and do the presentation without me. This is her presentation.  She decided what she wanted to say, what pictures to use and even the title (lol!) on her own!


Ally reported that the presentation went very well and the kids had some really good questions.

How does the pump work?
How long does it take you to go back high, after you are low?
Can you trade your pancreas with someone else?

She was proud of herself too!