A Very Unlikely Shout Out

Ally had to have knee surgery yesterday.  The poor girl has gone through so much in her short life.  Sometimes I feel like its just so unfair.  It makes me feel better to blame diabetes for the crappy stuff that happens.  Only this time, the orthopedic surgeon tells us that this is not related to her diabetes or her JIA (Juvenile Idiopathic Arthritis).  He said this is a normal person problem!  Gee, how did she get so lucky to have a normal person problem too??

After meeting with the surgeon, I felt comfortable and even though I wished that Ally did not have to go through this procedure, I felt good that he could fix it.

My anxiety was with the whole idea of putting her under for the 2 hour surgery.  Maybe anxiety isn't the right word...panic may be better.  I almost couldn't breathe thinking about her being away from us for 3-4 hours, under anesthesia.  How could I be sure that someone was monitoring her diabetes during that time?  You might say, well she WAS in a hospital, surrounded by doctors and nurses right?  But  being a doctor or a nurse does not mean that you understand how to manage diabetes.

The surgeon and his team assured me that they would work closely with our diabetes team and that they would be monitoring her blood sugars the entire time that she was away from us.

I spoke with our endo and nurses in the diabetes clinic several times before the big surgery day.  They instructed us to keep her BG in range as much as possible overnight and leading into surgery.  They wanted to keep her basal rate the same, but add extra BG checks to  make sure she was holding steady.  We had a pretty good plan in place, but most of you know how hard it is to "plan" a blood sugar number.  Yeah, nearly impossible!

Ally could not eat after 3 am and could have clear liquids only until 7 am.  Since her basal rate increases at 6 am, I was mostly worried about her going low and having to treat it.  If she were to need juice or something to treat a low blood sugar, they would have to cancel surgery.  So I set a temp basal decrease for a couple of hours beginning at 6 am.

Once she got her IV they would be able to pump glucose through that if she were low...I just had to get her to that point.   I had a goal of a BG between 150-200 when we left for the hospital.  This is higher than her normal range, but I felt better giving myself a little cushion because I could give her insulin but I wouldn't be able to give her sugar if she were low.  I knew they would be checking her...and they did every hour, or more if they thought she was dropping. I also guessed that the stress of the surgery would make her bg climb.

Leaving our house, BG 165.  Going into surgery, BG 156.  Three hours later, coming out of surgery, BG 155.  The flat line of her CGM overnight was beautiful!

It may sound as though I am tooting our own horn here...but I'm really giving a shout out to the big D for cooperating!

I can't even believe that I'm saying this out loud (and Lora, you warned me, so I'm giving you permission to say I told you so, when this comes back to bite me!).  D actually cooperated!  I know, that may be something you have never heard before.  I can't even believe it myself.


Surgery went well.  Ok, except for the going to sleep part.  She freaked out a little...or a lot!  She was nervous and kept saying that she wasn't ready.  Then they let her put the mask on, she tried, but chickened out and pulled it off.  Then she started screaming that she felt low (I'm sure she inhaled just enough gas to make her feel that way).  Then when they had to force the mask on, she screamed HELP!  HELP! until she fell asleep.  It was traumatic.  I prayed that she wouldn't remember it and at first it seemed that she hadn't.  When she woke up she said, "I think I worried for nothing."  and "I'm really glad that they let me hold the mask myself.  I don't even remember falling asleep."  I felt a huge relief that she had not remembered that awful moment and wished there was a way for me to forget it.  Then today she said that when she tells people about the going to sleep part, she will leave out the part where she screamed HELP!  :(  I guess she remembered after all :(

Ally is doing well today.  She is having a moderate amount of pain, but that was to be expected.  She will not be able to bear any weight on her leg for 6 weeks.  As much fun as she thought the crutches were going to be, I think we are going to be spending a lot of time on this couch! 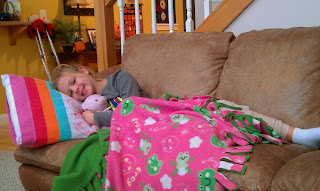 I am going to take advantage of this opportunity to get some extra snuggles for sure!  So happy that this week is over and so very proud of my brave girl!  She wrote me this note from the couch today between naps...

(No D day means no FB, Twitter, Blogs or the like that mention anything surrounding that D word.)
Highlights of our weekend...on a No-D day! 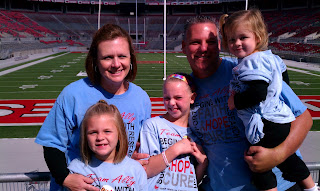 Showing the girls the inside of the horseshoe at
the Ohio State University...GO BUCKEYES!﻿ 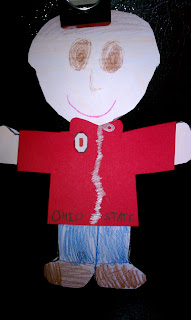 Converting Flat Stanley
(who is visiting us all the way from the home of the Candy Hearts family)
into a BUCKEYE! 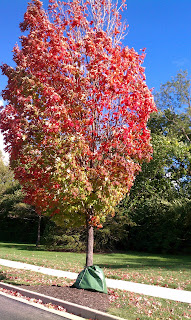 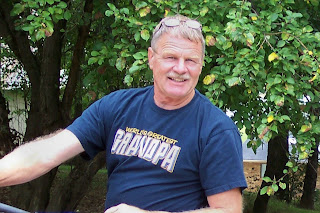