What is that Blue Circle you SAE? 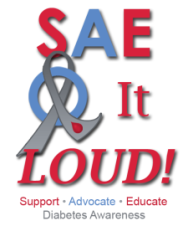 Thank you, Sarah, for getting the ball blue circle rolling!  It was her idea to kick off Diabetes Awarenss Month with SAE DAY! (pronounced "say")  A day to intentionally SUPPORT, ADVOCATE, and EDUCATE the world about diabetes....or at least a day to come up with a plan, act on ideas, or step things up a notch!

I am going to make every effort to SUPPORT, ADVOCATE, and EDUCATE you all about diabetes this month.  However, I am not quite the superhero rockstars that Jen, Wendy, Hallie, Donna, Tracy, Meri, Lora, Kristi, Nicole, Heather, Leighann, and Rachael are....just SAEing!  You see, they are participating in NaBloPoMo (National Blog Posting Month).  Let me know if you are NaBloPoMo-ing it too this month so that I can be sure to SUPPORT by reading your blogs.

So, today I will start by answering the question that I know some of you are asking....
What is that blue circle?

(The following description is taken from diabetesbluecircle.org.)
What is the history of the blue circle?

The icon was developed originally for the campaign for a UN Resolution on diabetes.

The circle occurs frequently in nature and has thus been widely employed since the dawn of humankind. The significance is overwhelmingly positive. Across cultures, the circle can symbolize life and health. Most significantly for the campaign, the circle symbolizes unity. Our combined strength is the key element that made this campaign so special. The global diabetes community came together to support a United Nations Resolution on diabetes and needs to remain united to make a difference. As we all know: to do nothing is no longer an option.

The blue border of the circle reflects the colour of the sky and the flag of the United Nations. The United Nations is in itself a symbol of unity amongst nations and is the only organization that can signal to governments everywhere that it is time to fight diabetes and reverse the global trends that will impede economic development and cause so much suffering and premature death.


If you'd like to help spread awareness of diabetes and don a blue circle...check out worlddiabetesday.org.